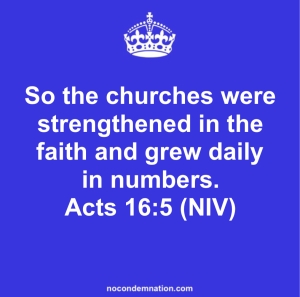 Reading:  Paul came to Derbe and then to Lystra, where a disciple named Timothy lived, whose mother was Jewish and a believer but whose father was a Greek. The believers at Lystra and Iconium spoke well of him. Paul wanted to take him along on the journey, so he circumcised him because of the Jews who lived in that area, for they all knew that his father was a Greek. As they travelled from town to town, they delivered the decisions reached by the apostles and elders in Jerusalem for the people to obey. So the churches were strengthened in the faith and grew daily in numbers.

Paul and his companions travelled throughout the region of Phrygia and Galatia, having been kept by the Holy Spirit from preaching the word in the province of Asia. When they came to the border of Mysia, they tried to enter Bithynia, but the Spirit of Jesus would not allow them to. So they passed by Mysia and went down to Troas. During the night Paul had a vision of a man of Macedonia standing and begging him, ‘Come over to Macedonia and help us.’ After Paul had seen the vision, we got ready at once to leave for Macedonia, concluding that God had called us to preach the gospel to them.

From Troas we put out to sea and sailed straight for Samothrace, and the next day we went on to Neapolis. From there we travelled to Philippi, a Roman colony and the leading city of that district of Macedonia. And we stayed there several days. On the Sabbath we went outside the city gate to the river, where we expected to find a place of prayer. We sat down and began to speak to the women who had gathered there. One of those listening was a woman from the city of Thyatira named Lydia, a dealer in purple cloth. She was a worshipper of God. The Lord opened her heart to respond to Paul’s message. When she and the members of her household were baptised, she invited us to her home. ‘If you consider me a believer in the Lord,’ she said, ‘come and stay at my house.’ And she persuaded us.
‭‭Acts‬ ‭16:1-15‬ ‭(NIV)

Pray: Father, may we each serve our part in strengthening your church.  We pray especially for those churches where their leaders have moved away from the truth of Scripture and this has resulted in a weakening of the church.  May your Holy Spirit draw them back to you in repentance.  Amen