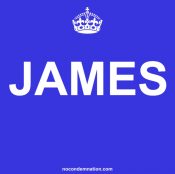 What good is it, my brothers and sisters, if someone claims to have faith but has no deeds? Can such faith save them? Suppose a brother or a sister is without clothes and daily food. If one of you says to them, ‘Go in peace; keep warm and well fed,’ but does nothing about their physical needs, what good is it? In the same way, faith by itself, if it is not accompanied by action, is dead.
James 2:14-17 (NIV)

Consider: Having set out in chapter 1 that Christians should put what they read in the Bible into practice day-by-day, James moves on in chapter 2 to two practical examples of faith in action. These are:
Not showing favouritism in any way;
Ensuring your life (works) conform to your profession (faith).

James opens with a discussion that would be just as relevant today in our society. He sets out before his readers the argument that to show favouritism to people because of wealth or status is contrary to Scripture. He uses the example of two people coming into their fellowship, one rich and the other poor. While society at large would differentiate between these people, within the household of God it is not appropriate to treat people differently on the basis of worldly considerations. James doesn’t appeal to anything except the authority of Scripture in coming to this view. He says in 2:8 – ‘If you really keep the royal law found in scripture “Love your neighbour as yourself,” you are doing right. But if you show favouritism , you sin …’ It is interesting that in today’s society, some of those who call themselves believers are unwilling to bow to the authority of the Bible, instead taking their lead from what they call a ‘higher authority’, usually based on man’s intellect or the prevailing cultural norms. As Christians there can be no higher authority than God himself and what he has revealed through his Word.

James moves on to his second area of concern – that a person’s life and actions must conform to the profession if faith they have made. Then, as today, there are those who say they are believers, but whose lives (works) show that their profession is spurious. Some commentators have made much of James’ argument, even saying that he contradicts Paul’s declaration that salvation comes through faith alone. However, James is not contradicting Paul, but is instead reinforcing what he says. James and Paul both believe that true faith is to be found in Christ alone, but James questions someone’s faith that is merely professed and not acted upon (see 2:14). Remember what he said in chapter 1 about putting what you read in the Bible into practice. His argument is that someone making a true profession of faith will live out their new life day-by-day.

Pray: Father, help us not to judge people by their worldly status and wealth, but to treat all believers equally. May our lives be shining examples of actions that speak clearly of our inner profession of faith. Amen